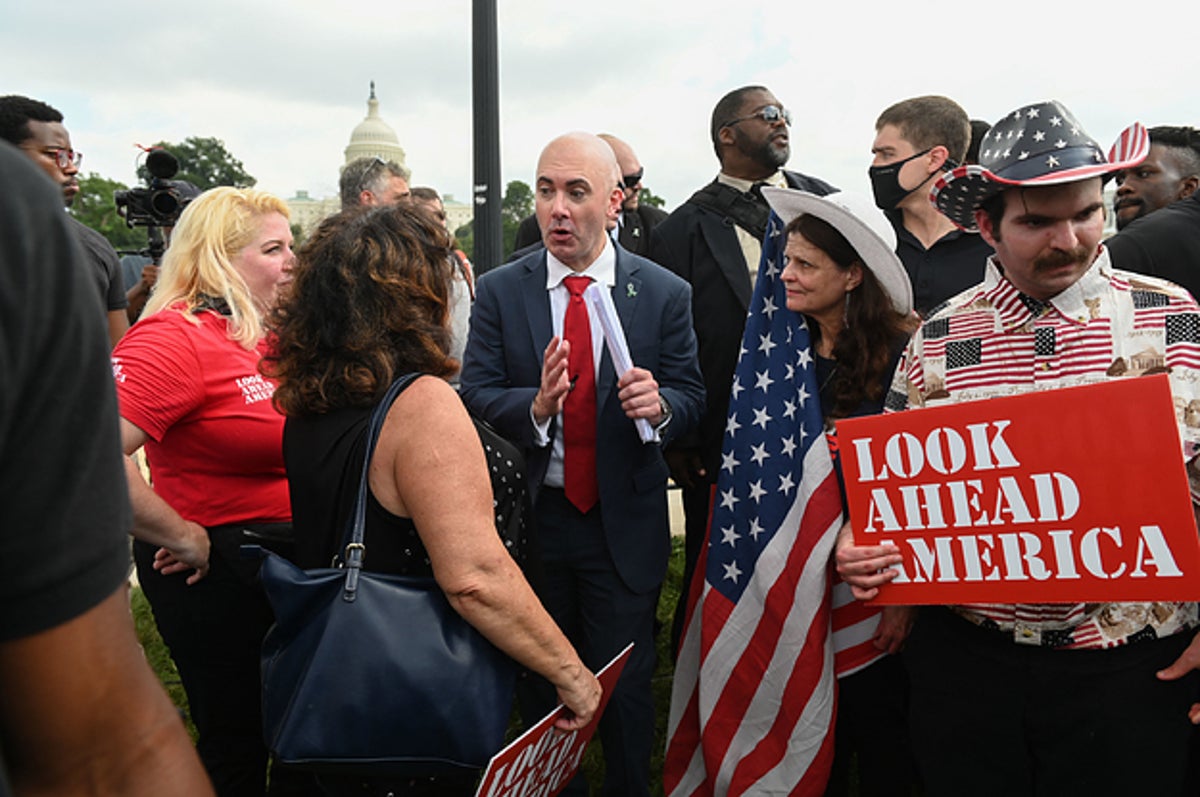 WASHINGTON — Eight months after former president Donald Trump’s supporters staged an insurrection at the Capitol, about 100 protesters gathered outside on Saturday to defend the people arrested on Jan. 6, causing law enforcement officers still reeling from the insurrection to mobilize in huge numbers.

Top brass within the Capitol Police, DC’s Metropolitan Police Department, and the federal government made a show of their preparations for the event, assuring the public that this time they would be ready. MPD activated its full force on Saturday, Capitol Police again erected fencing around the Capitol building, and the Department of Defense put 100 National Guardsmen on standby.

In the end, rally attendees were vastly outnumbered by police, media, a few dozen counterprotesters, and curious onlookers. Capitol Police estimated that approximately 400-450 people were inside the protest area, excluding law enforcement. One person was arrested for possessing a knife and another was arrested after they were “spotted with what appeared to be a handgun,” Capitol Police tweeted. A spokesperson for the department confirmed that the man did have a gun on him.

Billed as “Justice for J6,” the event was designed to protest the incarceration of nonviolent people who stormed the Capitol, rally organizer Matt Braynard, a former Trump campaign staffer, insisted multiple times. But one of the few speakers on Saturday was the girlfriend of Jonathan Mellis, a man charged with 10 counts, including assaulting law enforcement, on Jan. 6. Like Mellis, the majority of people who are in jail for their participation in the insurrection are charged with violent crimes including assaulting police. About 140 law enforcement officers were injured that day and five people were killed.

Despite its size, the rally is part of a larger movement on the right to downplay and excuse the events of Jan. 6. Braynard and other speakers suggested that more people would have come to join the rally but that they were afraid and praised the brave few who made it out. Those who did attend carried signs about due process and saying that Ashli Babbitt was “murdered” (the officer who shot her as she tried to enter a hallway outside the House chamber has been cleared of all wrongdoing and has faced numerous death threats).

Braynard and others who spoke at the rally praised the hundreds of police officers who stood in riot gear in 85 degree weather so they could deny that an “insurrection” had occurred, read letters from people who are incarcerated for their actions on Jan. 6, and show images of people walking through the Capitol that day. The crowd applauded the officers on duty Saturday several times. ”I know it’s hot out here, I know it’s the last thing they want to be doing today,” Braynard said. “But they’re doing their duty and we’re grateful.”

Braynard has been hosting rallies for the Jan. 6 defendants and raising money for his organization, Look Ahead America, for months. He was let go from Trump’s 2016 campaign after five months and has been trying, unsuccessfully, to return to the former president’s inner circle ever since. He was rejected for a low-level job on Trump’s 2020 campaign, he told BuzzFeed News last month. And after the election, he earned an invite to Trump campaign headquarters to present his supposed method of proving widespread voter fraud, he said, only to be left waiting outside on the sidewalk before being told he wouldn’t be allowed in.

The top tiers of MAGA world didn’t embrace his rally either. Though Trump put out a statement on Thursday about Jan. 6, saying that people were “​​being persecuted so unfairly,” he never mentioned Braynard’s rally. Roger Stone, a longtime Trump ally, told people not to go, calling it “a set-up,” and Fox News’ Laura Ingraham dedicated a segment of her show last weekend to ridiculing the rally; both Stone and Ingraham said no one in their circles had even heard of it. Former Trump adviser Steve Bannon was one of the few exceptions, hosting Braynard on his show several times to talk about the rally.

In the days leading up to Saturday’s event, Braynard’s accounts on Gab and Telegram were full of people saying the rally was a trap and urging people not to go. Some even accused Braynard of being an FBI plant organizing a “false flag” operation to arrest more Trump supporters. Groups responsible for some of the most intense violence at the Capitol on Jan. 6, including the Proud Boys, likewise told their members to avoid the rally. Braynard dismissed them during the rally as “guys who only exist on the internet.”

Braynard made big promises about Sept. 18 that went unfulfilled. He said that members of Congress would speak. He told BuzzFeed News in August that they’d have “one incredibly substantial speaker that will basically demand your attendance.” Aside from Mellis’ girlfriend, the most high-profile speakers at the rally were two pro-Trump congressional candidates. “I’d say even better than the congressmen coming to speak is two soon-to-be congressmen,” Braynard told the crowd.

Although he told rally-goers that the two candidates — Mike Collins of Georgia and Joe Kent of Washington — had approached him and asked if they could speak at the rally, he didn’t mention that at least one of them is his own client. Kent, who is challenging Rep. Jaime Herrera Beutler, one of the 10 House Republicans who voted to impeach Trump after Jan. 6, has paid Braynard $8,000 this year for “campaign consulting,” according to Federal Election Commission records. Braynard didn’t respond to a request for comment on whether he is working with Collins’ campaign as well.

Braynard has been raising money for the rally and off of 2020 election conspiracy theories since November. His website’s livestream of Saturday’s rally also included a plea for contributions. He ran a GoFundMe to investigate voter fraud, which he claimed brought in $220,000, before it was shut down for spreading misinformation (GoFundMe told Politico that all those donations were refunded). Then he moved to the Christian fundraising site GiveSendGo, where he raised $675,492 between December and May for more voter fraud research.

Since then, he’s been soliciting donations for more research and Saturday’s rally through Look Ahead America, a group he and other former Trump staffers founded in 2017. He wouldn’t say how much he raised, but he said it was enough to hire nearly a dozen staff and to pay himself a $60,000 salary. The group has been operating as a 501(c)3, a tax-exempt status it lost last year after failing to file required tax forms. Braynard told BuzzFeed News last month that he had refiled with the IRS and that all the money LAA has raised would be reported to the IRS.