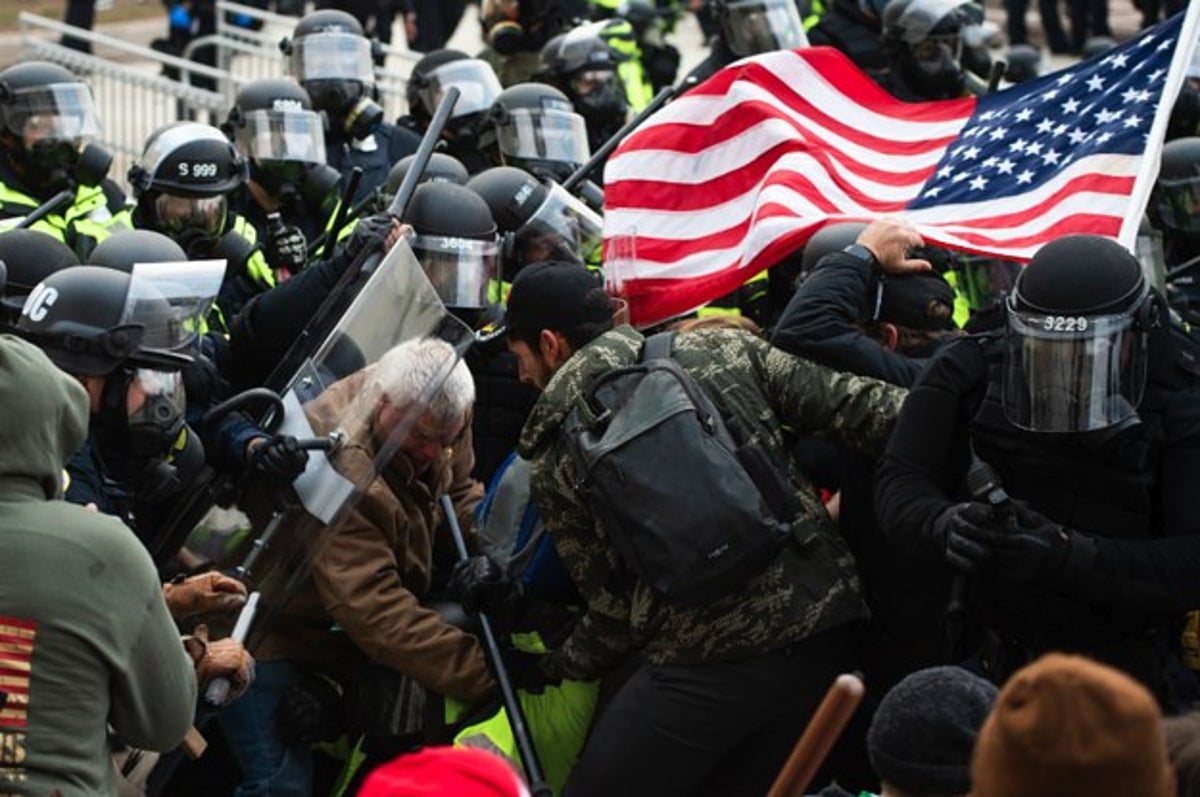 WASHINGTON — Organizers of this weekend’s “Justice for J6” rally say the event is meant to support “nonviolent offenders,” but the majority of defendants held in jail in connection with insurrection are charged with assaulting police or other violent crimes.

Of the more than 600 alleged Capitol rioters arrested to date, 71 were in jail as of Sept. 17. The narrative that defendants ordered to stay behind bars while their cases are pending are “political prisoners” has become a rallying cry among conservatives who backed former president Donald Trump’s “Stop the Steal” movement. On Saturday, Trump supporters are expected to participate in a demonstration pitched as showing support for those charged with storming the Capitol and temporarily stopping Congress from certifying the results of the election.

Matt Braynard, a conservative activist whose Look Ahead America group is organizing the rally, has insisted the event is about supporting “nonviolent offenders.” But Braynard, who briefly worked for Trump’s 2016 campaign, has blurred that line, simultaneously promoting the “political prisoners” concept and the notion that the latest rally is, in fact, about the incarcerated defendants. This summer, he submitted a “Human Rights Complaint” on their behalf to the United Nations and organized rallies specifically to protest their detention.

Earlier this week, Braynard tweeted that it wasn’t fair that incarcerated Jan. 6 defendants couldn’t go home when, in some cases, people charged with murder are granted release pending trial. He ended the tweet with the rally hashtag “#JusticeforJ6” and a link to the event site. Braynard did not return a request for comment.

Forty-seven of the defendants who are currently in jail are charged with at least one count of assaulting or interfering with law enforcement officers at the Capitol, according to BuzzFeed News’ analysis of the Jan. 6 prosecutions. Another nine defendants are charged with conspiring to attack the Capitol or destroying government property (or aiding others), two other categories of crimes that a federal appeals court explicitly identified as grounds for the government to make a stronger case for pretrial detention.

Most of the remaining cases feature a mix of defendants charged with other serious crimes — including carrying a gun onto the Capitol grounds, possessing explosives, and making threats — or who either were allowed to go home and then violated the terms of their release, were in custody on unrelated charges, or were considered likely to flee or destroy evidence if allowed to go home.

In the overwhelming majority of the hundreds of cases filed to date, judges have allowed alleged rioters to go home after their first post-arrest court appearance with no objection from prosecutors. The bar for keeping someone in jail before they’re convicted of a crime is supposed to be high. Over the past eight months, judges have narrowed the circumstances under which the government can successfully argue to keep Jan. 6 defendants in custody as they wait for a trial or attempt to negotiate a plea deal.

Judges in a few cases have cited a person’s support for Trump as part of the reason they continue to pose a danger to the community, especially since Trump has continued to push the lie that the election was stolen. But they’ve also made it clear that the substance of a person’s political beliefs wasn’t the problem — it was their willingness to act on those beliefs with violence that landed them behind bars.

On Sept. 3, US District Judge Rudolph Contreras ordered defendant Jeffrey Brown of California to remain in jail. Brown had been charged, among other things, with deploying pepper spray against a police line guarding one of the entrances to the Capitol as a large mob tried to push through. The judge wrote that it didn’t help Brown’s case that he’d been part of a pre–Jan. 6 group chat titled “The California Patriots- DC Brigade” that described its members as “ready and willing to fight.” Contreras also noted that late last year, police were called to a California Costco after Brown staged a one-man protest inside the store against the state’s COVID-19 restrictions.

“His actions at the Capitol show that he is willing to use violence — even against law enforcement — to achieve his political aims,” Contreras wrote. Brown is appealing that decision.

Defendants kept in pretrial detention include: a New Jersey man charged with punching an officer in the head; an Arkansas man accused of using an American flag to repeatedly hit an officer; a California man charged with using a taser against DC police officer Michael Fanone, who recently testified before Congress; a Pennsylvania man accused of being part of a group that knocked an officer unconscious; and a California man accused of deploying pepper spray and using a crutch and a metal pole as “bludgeoning weapons” against police, and who was allegedly recorded on video saying that top Democrats in Congress “need to hang from these motherfuckers” as he gestured to a noose on the Capitol lawn.

Thirty-seven of the Jan. 6 defendants were being held at the DC jail as of Sept. 2 according to the DC Department of Corrections. In court filings, defense lawyers have described how these defendants are being kept together in what’s been unofficially dubbed the “Patriot Unit.” Some defendants challenging their detention have argued that they’ve been unfairly kept in solitary confinement and faced physical violence. They’re also arguing that they aren’t able to have confidential conversations with their lawyers and haven’t been able to access materials related to their case.

Conditions at the DC jail are dirty and unsafe, and people too often are kept in solitary confinement, said Deborah Golden, a local civil rights attorney. Many of the complaints lodged by Capitol riot defendants are the same ones that other incarcerated people, defense lawyers, activists, and city investigators have raised for years.

Not everyone charged with assaulting police officers on Jan. 6 is in jail. Judges have considered the nuances of what exactly a defendant is accused of doing, whether they can be trusted to follow court orders, and the likelihood that they’ll engage in a repeat attack on core democratic functions.

In the case of Julian Khater and George Tanios, charged with conspiring to assault US Capitol Police Officer Brian Sicknick with chemical spray, Khater is in jail and Tanios is not. Both men appealed after a federal district judge ordered them to stay behind bars. The US Court of Appeals for the DC Circuit agreed with the government that Khater — the one accused of actually deploying the spray — should stay in custody, but ruled that the government failed to meet its burden when it came to Tanios.

Douglas Jensen, an Iowa man charged with leading a mob that chased US Capitol Police Officer Eugene Goodman inside the Capitol while carrying a knife in his pocket, was granted pretrial release in July over the government’s objection. One of the conditions the judge imposed was that he couldn’t access the internet, given Jensen’s own explanation that he’d been radicalized by QAnon and conspiracy theories he read online. A month after he got home, he was caught accessing the internet — and eventually admitted streaming election fraud conspiracy theory content — and was sent back to jail.

Prosecutors unsuccessfully argued for detention for Federico Klein, a former Trump administration political appointee charged with assault; Klein is accused of being part of a mob trying to push past officers in a tunnel near the lower west terrace. In an April opinion, US District Judge John Bates noted that Klein wasn’t accused of bringing a weapon to the Capitol, that there wasn’t evidence he’d planned in advance for violence, and that he didn’t have any meaningful record of previous criminal conduct.

Judges are making detention decisions on a case-by-case basis, following general parameters that the DC Circuit laid out in March in the case of two alleged rioters, Eric Munchel and his mother, Lisa Eisenhart. Munchel and Eisenhart aren’t charged with violence, but a district judge ordered them jailed, citing allegations that Munchel picked up plastic zip tie handcuffs he found inside the Capitol and general threats of violence the two made during and after the riots. The appeals court held that wasn’t enough.

“In our view, those who actually assaulted police officers and broke through windows, doors, and barricades, and those who aided, conspired with, planned, or coordinated such actions, are in a different category of dangerousness than those who cheered on the violence or entered the Capitol after others cleared the way,” Judge Robert Wilkins wrote at the time.

Besides people charged with assault, the incarcerated defendants include several defendants charged with breaking windows and conspiring before Jan. 6 to try to stop Congress from certifying the election results and planning for violence — the other categories identified by the DC Circuit. Two defendants identified as leaders within the Proud Boys extremist group, Ethan Nordean and Joseph Biggs, had been allowed to go home after they were first arrested. But a judge ordered them into custody in April after the grand jury returned a new indictment that charged them with being leaders in a conspiracy. They’re both fighting their detention.

Of the 15 defendants who aren’t charged with assaulting police, destroying government property, or conspiracy, four are charged with weapons offenses — including carrying a gun on Capitol grounds and illegally possessing guns and explosives — or with making threats of future violence against Democratic leaders, among other people. Four were ordered jailed for violating release conditions, including one person charged with domestic violence while on home confinement. Three were already in jail on unrelated charges. The remaining four presented some combination of problems — evading law enforcement, violent language, risk to witnesses and evidence — that led judges to conclude there were no release conditions that would be enough to protect the community or ensure a defendant would show up to court again.

One of the most high-profile defendants, Jacob Chansley, wasn’t charged with assault, destruction of property, or conspiracy, but a judge repeatedly rejected his attempts to get out of jail after his arrest in January. The government argued for detention on the grounds that he’d walked around the Capitol carrying a pole with a spear tip and flag attached, disobeyed orders to leave, and left a note on the dais that read, “ITS ONLY A MATTER OF TIME JUSTICE IS COMING!”

Chansley had bragged about participating in the riots the day after, told the FBI he wanted to go back to DC to protest, and, after he was jailed, participated in a sit-down with 60 Minutes+, and said he didn’t regret his loyalty to Trump at the time. Considering the entirety of Chansley’s situation, US District Judge Royce Lamberth concluded that there were no release conditions that would assure him Chansley wouldn’t try to flee or commit another offense. Chansley had argued that he was following Trump’s direction, but the judge found that just showed his inability to “exercise his independent judgement.”

Chansley took a deal with the government and entered a guilty plea on Sept. 3. Lamberth denied his request to be released until his sentencing in November.

“Harm befell the nation as a result of Chansley’s actions on January 6, 2021,” the judge wrote. “Given Chansley’s serious crime — and the Court’s general requirement to detain pre-sentencing defendants ‘as a background rule’ — it would take more than a perfunctory acknowledgment of contrition to convince the Court that his change of heart decreased his flight risk.”